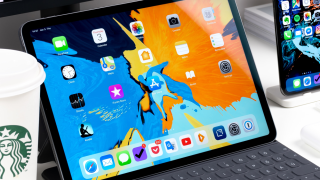 Apple has been touting the iPad as a laptop replacement for a while now, perhaps most infamously through its 2018 ads in which a young tablet user asks, "What's a computer?" The ads were widely mocked at the time, but the last two years have seen the iPad come on leaps and bounds in terms of productivity thanks to a new OS and the sheer amount of incredible iPad Pro apps. And now, rumour has it that the rumoured iPad Pro 2020 might be getting the one feature that could turn it into a bonafide laptop-killer: a keyboard with a proper touchpad.

The information comes (appropriately) from The Information,  which credits the scoop to "a person familiar with the matter". It doesn't say who (we presume it isn't Tim Cook), but the mystery source claims that Apple is already preparing mass production of the keyboard accessory with longtime contractor Foxconn Technology, and "will likely release the accessory alongside the next version of the iPad Pro expected later this year". (See our roundup for all we know so far about the iPad Pro 2020.)

So, this will most likely be an update to the current Smart Keyboard Folio, currently one of our best tablet keyboards and sold separately to the iPad. While we don't know which iPad models it will work with, knowing Apple, we can see it being restricted to the newest iPad Pro. The more basic models already use a separate accessory (the older but still great Smart Keyboard), and Apple will probably want to keep the Pro, well, pro.

As regular iPad users, we're game for anything that might further increase its functionality. We're already big fans of the top-end tablet (check out our iPad Pro 11-inch review) which is edging closer to replacing the MacBook for several tasks – especially since the release of its own iPadOS.

But we can't help but wonder – do we actually want it to replace the laptop completely? The iPad was originally conceived as a much more casual device than the MacBook, and the blurring boundaries are making things a little confusing. Soon we might end up with a device with an attached keyboard and trackpad, which opens and closes in a clamshell-type design. Oh, wait.