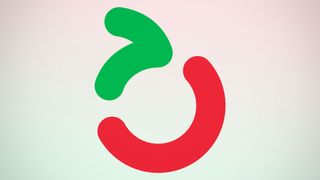 We were as surprised as anyone to learn this morning about the launch of a brand new apple logo and visual identity, especially one that's a radical departure from the previous version. But that's just what's been announced by the U.S. Apple Association this week, and this minimal redesign has left a pretty sweet taste in our mouths.

The U.S. Apple Association represents America's apple growers, apple associations and apple-related companies, and its previous logo design was a strong piece of work – a stylised red-and-green apple with stars-and-stripes detailing – but was looking a little dated.

The new visual identity is the work of branding agency Mekanic, and features an abstract and minimal design; it's still red and green, albeit in much brighter, more saturated shades than the old logo's autumnal tones, and it's still clearly an apple, but it's drawn with just a pair of bold, curved and weighty strokes.

USApple explains that the new logo evokes the idea of seasonality, cycles and new growth, and also points out that the leaf and stem point forward, representing the association's commitment to advancing the industry through advocacy and leadership.

Getting to this new logo design has been a fairly long process for both USApple and Mekanic. USApple's director of communications, Tracy Gondine, says that the process, and Mekanic's vision for the brand, has been informed by two years of discovery work, including interviews with growers, suppliers, leadership and Young Apple Leaders.

The result of all this work is a logo that really gets to the core of the association and provides it with an exciting new visual direction. And while a radical new design such as this is normally the sort of thing that provokes howls of outrage online, so far we haven't seem any adverse reaction to this at all, which is an encouraging sign.

Alongside the new logo and visual identity, USApple is also working on updating its website in order to provide better functionality and the most informative user experience, as well as following current best practices. The new USApple site will be unveiled within the next few weeks.