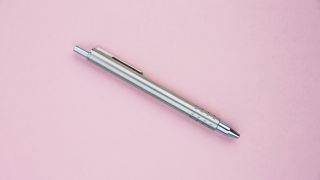 Image by Markus Spiske on Pexels

Modern art tends to divide people. Even in modern art galleries, where people have chosen to look at modern art, there's usually at least one person saying, "how is that art?" or "I could've done that". Recently, Jack Sim decided to test out whether anyone can create modern art by seeing if visitors at the National Gallery Singapore would believe that an ordinary pen was part of a modern art exhibit.

And guess what? They absolutely did. Soon after Sim placed his pen on the floor of the gallery, people began to take photos of it – and we like to imagine, marvel at its beauty. (If you'd like to try a similar approach, you might want to get a new pen – see our post on the best pens, or maybe even the best pencils.)

After a while, Sim picked up his pen and people realised that it wasn't in fact art. And, we imagine, rapidly deleted their Instagram Stories about this hot new piece of artwork.

The exhibition was about minimalism, which sort of makes the story more believable. Other exhibits included Sunflower Seeds by Ai Wei Wei, which is just that – a collection of sunflower seeds, a barbed wire cube by Mona Hatoum, named Impenetrable, and Anish Kapoor's Non Object (Door), which looks a lot like the name suggests.

This story reminds us of what happened a couple of years ago, when two teenagers put a pair of glasses on the floor at the San Francisco Museum of Modern Art and got a similar reaction.

It also reminds us of when a man fell in Anish Kapoor's black hole installation, 'cos, well, that was a pretty unforgettable story. It then got us thinking about what art actually is, and whether art galleries are going to see a sudden increase of people placing things on gallery floors in the hope they'll become a viral hit.

But then we stopped all this musing, and just remembered the crux of this story: people took photos of a pen because they thought it was a modern art exhibit. Pretty funny, right?