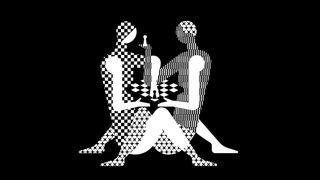 World Chess has played a winning move with its surprisingly raunchy branding for the 2018 World Chess Championship match, unveiled this week. The scheme, which the association describes as 'controversial and trendy', is the work of Moscow design agency Shuka, and includes perhaps the sexiest imagining of a chess game ever created.

The key illustration shows two figures fighting it out in a pose that's a lot more up-close-and-personal than is usual for a chess match. We're not big chess players at Creative Bloq, but we don't remember having to intertwine legs with our opponents. There's also a more family friendly design involving lots of hands and chess pieces.

A black and white scheme is an overt reference to the chess board, and the traditional square grid features throughout, mixed in with graphic cross and dash patterns. The scheme is striking and complex, and has definitely ramped the event up a few notches in the cool stakes.

Thus far, reactions from the chess community have been less than complimentary, ranging from the skeptical "Scissor me timbers" to the more forthright "LOL is this a joke?". However, we are fans. As well as serving up a hint of Malika Favre-style mischievousness, Shuka has deftly captured the complexity of the game and the mental acrobatics involved in this level of competition. The edgy vibe is also perfect for this year's match host city of London.

Shuka's branding will appear on mugs, posters, and signage at the match in November, as well as press and communications surrounding the event. Fans can also pick up a 'sexy' limited edition print while stocks last. The design studio has form when it comes to cheeky branding, having put together a distinctly unpure scheme for dating app Pure last year.

World Chess first started getting stylish in 2011 when it called in Pentagram to rebrand the association and capture the interest of a new generation, including introducing a trompe-l'oeil hexagonal logo. Shuka was involved in last year's championship match design, putting together event branding that celebrated the host city of New York. Perhaps a little injection of raunch could be all that's required to capture the attention of the general public.