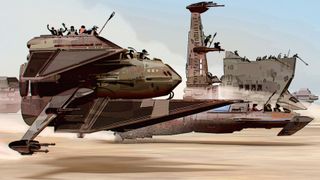 Are you sure you want to be a concept artist? After all, concept artists don’t get to draw whatever they want. They don’t even get to draw famous characters very often – if ever. Plus, most of their drawings will never see the light of day.

Disappointed? Hold up, there’s more. Concept artists don’t spend all their time playing video games. They don’t generally hang out on film sets of the latest 3D movies or hang around with big-name actors. They don’t live especially glamorous lives. They’re not really famous. They’re not really rich. Concept art is repetitive, it's labour-intensive. It is hard to get good at and harder to get a job in. In fact, you could even argue concept art isn’t really art. But it's also a pretty incredible job, and plenty of people want to get into it.

Here's more on what you need to know about becoming a concept artist, from those who have made it. And if you're already working within the industry, then skip to the next page for some top tips for how to become an even better concept artist.

“Concept art is very different from just drawing,” Feng Zhu says. He has over a decade’s experience working on Transformers, Call of Duty, and Star Wars. “In reality, about 90 per cent of our work is grounded and pretty dry. Even when you are on a high-profile project, the ‘fun’ stuff generally lasts about a month or so. The other two or three months are generally filled with more mundane stuff: how landing gear folds out, arranging button layouts in a cockpit, say.” Zhu reckons that only one out every 10 images makes it to the next round of production.

02. But is about solving problems

Christian Alzmann says it’s not uncommon to work on a design for months, only for it to be cut from the final film. Alzmann is concept design supervisor at Lucasfilm. He worked on Rogue One: A Star Wars Story and Star Wars: The Force Awakens. His job isn’t making art; it’s solving problems. His boss might say: ‘I need some concepts – this afternoon – for a vehicle that flies, but can’t have wings or rotors, and has to fit into the style of this film sequel.’ The picture Alzmann comes up with is “just the math formula we use to show our solution to the problem.”

03. Pick how you learn carefully

Art school is more expensive and less important than it’s ever been. Ben Mauro says some of today’s best concept artists – particularly the new generation – taught themselves using free or cheap online resources. Mauro is senior concept designer at Seattle game developer 343 Industries. His credits include Halo and Call of Duty, and he also worked on the new Metal Gear Solid film.

Mauro would go down the self-taught route, were he to start out today. He likes tutorial sites Gumroad, Schoolism and Learn Squared, but also recommends smaller specialists schools – like Zhu’s FZD School of Design in Singapore, or Concept Design Academy, The Workshop Academy, and Brainstorm School in the US. The crucial thing is that you learn from working professionals.

04. Then find your style

Two of the most important basic skills, Alzmann says, are perspective and directional lighting (see our guide to how to draw perspective). You should study frames from your favourite films to see how these things are used to tell the story. Master those and you can move on to the exciting bit: finding your own style.

To do this, Mauro suggests you study widely – automotive design, architecture, fashion, film history, art history, biology… In short: don’t make “derivative works of other people’s interpretations of these things; it’s better to go to the source material and interpret it for yourself.” That being said, derivative isn’t all bad. You need to be comfortable working in the latest design trends. It’s a balancing act.

It’s not enough to do good work. You also have to get your work seen. Consider scheduling time to share your art and look for work. When you’re ready, Mauro says, send your online portfolio (ArtStation is good, Squarespace if you want something more personalised) to the company or franchise you want to work for. It’s good to have direct contact, but that might take a bit of detective work.

Conventions are good places to meet people – nothing wrong with asking to email them your portfolio. Otherwise, search Facebook, LinkedIn, ArtStation. If you can’t find a contact, try and piece it together by figuring out how that company formats its email addresses (Is it first name or last name first?). Send friendly, professional emails and then one or two polite follow-up messages.

Your portfolio should prove you’re ready to start immediately; that you understand the company’s style. Alternatively, you could build a portfolio that demonstrates your own, unique style. This is a bit riskier, but your style or speciality might offer the thing that company is currently missing. Mauro’s portfolio is a mix.

Zhu says there are three main positions for concept artists. Seniors create “world-building images such as lead characters and environment establishing shots” and “are rarely involved in labour intensive work.” Mid-levels also design characters and environments, but they’re still required to roll up their sleeves and do some labour-intensive stuff. Juniors do all of the hard work: designing variations, doing orthographics, cleaning up line drawings, and extracting line details from digital paintings that have been created by seniors or freelancers.

07. Work on your communication skills

Mauro believes that being good at art is only half the job. You need to be a great communicator. If you’re an off-site freelancer then this skill is especially important because it’s unlikely you’ll be able to speak to people face to face. You need to know to give the client what they want. You sometimes need to help the client work out what they want, too.

Deadlines are usually tight. Typically, you receive a brief on Monday, finish it Thursday, then meet or speak with the client on Friday. Your concept designs must not only solve but also preempt problems for every person on the production line. For example, can the actor interact with it? Can the cinematographer achieve cool shots with it? Can the director create better, more compelling moments in the story with it?

You could be designing a small prop that takes a couple of weeks, or you could be spending four years designing a whole world, a whole universe. Mauro says: “I’ve had jobs where I was asked to do one little prop for two weeks that ended up with me being hired to design the rest of the film for two, three years after that.”

As a concept artist, you’re always an apprentice in a job where nobody ever really becomes a master. Tools, trends and workflows change quickly and often, so you have to keep studying. Mauro has over a decade’s experience in the industry, but he still watches tutorials every single week. The thing that all top concept artists have in common is “being highly adaptable and having the curiosity and enthusiasm to never stop learning.”

09. Remember why you want the job

So you still want to be a concept artist? Well, there are few more things you need to know. You get to be creative every day. You get to live in your imagination. You may even get paid to play the occasional video game. You might meet the odd movie star and visit the odd film set. You get paid to draw every day.

Your ideas – landing parts or cockpit buttons, characters or creatures – will become reality. Your solution to a certain problem will become greater than the sum of its parts, as hundreds of people work together to put it up on the big screen, or as part of a gaming experience played by thousands. Every now and then, you’ll get the job of drawing the flashy, pretty, epic picture, a concept that could be considered art in it own its right.

“When you’re working with a cool client on a cool project,” Feng says, “it really doesn’t feel like a job. The best project for me was Star Wars. The team was awesome, the director was nice – the project was a dream come true. I went to work happy all the time.

Next page: Practical tips for working as a concept designer

Current page: How to break into concept art