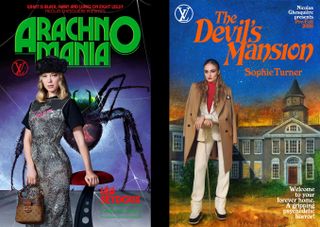 Louis Vuitton's latest collection is a glorious homage to sci-fi and horror books and films of the '70s. The fashion house has drawn on some mega stars to model for its Pre-Fall collection, including the likes of Jaden Smith, Sophie Turner, Robyn and Chloe Grace Moretz. (If you didn't know that 'Pre-Fall' was a season, you're not alone.)

To create the campaign, Louis Vuitton designer Nicolas Ghesquière photographed the stars in the new clothes, and then created made-up B movies or sci-fi or horror book covers around them. The results manage to be gloriously chic and modern, yet with a real retro edge. They may even be up there with some of the best poster designs ever made. Oh, and the clothes look good too.

Fancy creating something similar? See our roundup of the best free retro fonts.

And if you think that some of the images have a dreamlike quality about them, you wouldn't be far off. According to Vogue, Robyn's cover was inspired by a dream she had where she meets a talking tiger. That became The Night Chaser.

The quirky campaign seems to be part of a trend for major fashion houses pushing the boat out with their collection campaigns. Earlier in the month, Gucci caused a major stir when it unveiled a bizarre new logo to promote its Fall Winter 2020 Men’s Collection.

What's particularly interesting about Louis Vuitton's campaign is that it was the idea, rather than the clothes, that came first. "William Peter Blatty, who wrote The Exorcist, gave us the rights to print the cover of the book. It started there," Ghesquière told American Vogue.

"It’s such a great symbol for me to use a fiction and incorporate it into an outfit. I thought, what’s the reverse? To use the fiction as the illustration of the fashion. It’s a kind of a mirror effect in this action of representing them all in these different characters."