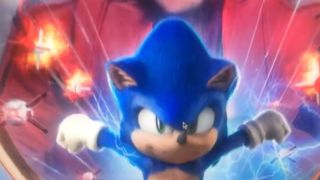 Have we just been treated to a sneak peek of the redesigned Sonic the Hedgehog from the upcoming Paramount movie? Apparently so, if a couple of images currently doing the rounds on social media are to be believed.

And while there's a chance they might not be the real deal, they're such an improvement on the original we've got our fingers crossed they're legit. Maybe the animation studio read our guide to character design for advice?

In case you've forgotten, the original Sonic the Hedgehog trailer outraged fans when it dropped due to Sonic's disturbing design. With strange teeth and an unsettling texture, the speedy hedgehog looked like he'd crawled right out of uncanny valley. In fact the backlash was so intense that Paramount announced it would redesign him.

So could these two images shared online by Twitter user @BestInTheGalaxy be the redesign fans have been waiting for?

We hope so. While it's not exactly hard, this version works much more than the original. The eyes are larger and positioned more closely together, the texture is stylised but still looks realistic enough to work next to live action footage, and he's even wearing his signature white gloves.

All of these elements are key to nailing the look of Sonic the Hedgehog, and they were all bizarrely missing from the first trailer. These tantalising images are much closer to the mark.

Of course, you can't believe everything you read on the internet. But there are a couple of factors that give these images some credibility. The image of Jim Carrey, who plays the villainous Dr Robotnik in the film, also appears to be new. So unless somebody's been playing around in Photoshop (or dabbling in deepfake tech), this would suggest these pictures are somewhat authentic.

Another thing to keep in mind is that character design leaks surrounding this film aren't anything new. Back in March the film's branding deck was accidentally revealed by Hamagami/Carroll, Inc, which also included a version of Sonic that's remarkably similar to what we saw in the official trailer that enraged fans.

If it turns out that these aren't real pictures, Paramount better have something better up its sleeves because fans seem to be giving them the thumbs up.