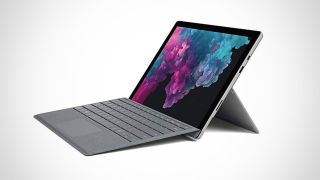 Amazon Prime Day is now over, but one of its most popular offers was on a 12.3-inch Surface Pro 6, which it knocked down to £749.99. That offer has expired, but if you're   still in the market for a shiny new Surface Pro 6, there are still some bargains to be had.

Note here you're not getting the same specs as the Amazon machine. These £689 models only have 4GB of memory rather than the 8GB you'll find in the Amazon offer; not only that, the cheaper model packs a Intel Core m3 processor rather than the Core i5 at Amazon.

Microsoft Surface Pro 6 12.3": £689 at John Lewis
It's cheaper than Amazon's Prime Day offer, but it's a lower-spec model with half the memory and a less powerful processor. For light users, this could be a smart buy – and it comes with a 2-year guarantee, too. AO is offering the same deal.
View Deal

And here's the updated Amazon deal as a reminder:

The difference is probably best summed up by the product descriptions over at AO.com - while it says that the 8GB model 'delivers seamless multitasking', the 4GB model 'easily handles light multitasking'. However, if you're after a Surface Pro for work then you probably still want to head to Amazon.

However if you're after a Surface Pro and you're not too bothered about performance, but even at its discounted price the Amazon offer is just a little too steep for you, then this is a fairly tidy alternative. You should still get plenty of use out of it and look good doing so.

For more UK options (or the cheapest prices in your country) check out the widget below.