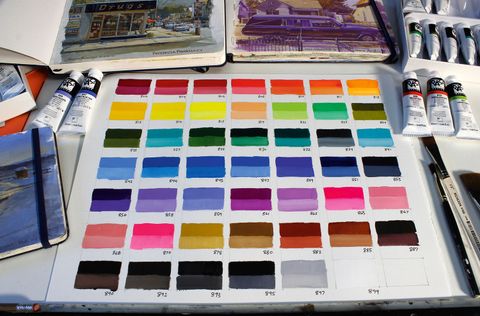 More paints than you probably need, but this is a great value selection for the adventurous painter.

The ShinHan company of Korea has introduced a line of paints called PASS Color, which are a hybrid of watercolour and gouache. The set contains 48 tube colours including highly saturated primaries and secondaries, a few fluorescent colours, some earth colours, Titanium White and black.

When faced with a large assortment of pigments, I like to explore the colours in small groups and combinations. For my first experiment, I painted a street scene using just three colours – Indigo, Vermilion Hue and Yellow Ochre – plus white. The Vermilion gave me a high chroma accent in the warm red range. The other two colours were muted and harmonious.

The ShinHan paints feel similar to a lot of other current brands of gouache paint. And, as other manufacturers do, they use a water-soluble gum arabic binder. The colours are rich in pigment without too much extender or filler, though they tend to be blends of less familiar synthetic pigments. As the paint comes out of the tube, it's not evenly mixed and it seems a little too runny, so I knead the soft plastic tubes to mix the paint and binder inside the tubes. This evens out the consistency and cuts down on drips.

Artists should note that many of the pigments are not lightfast. Eight of the 48 colours are rated with a "low degree of lightfastness," which means they will fade quickly if they're exposed to a lot of UV light. That wouldn't be as much of a problem for designers whose work isn't going to be hung on a wall in bright light or for urban sketchers painting in sketchbooks.

The paints are certified non-toxic. That means there are no Cadmiums. Instead, the reds and yellows are substitutes such as Naphthols and Arylides, which are relatively transparent. These non-toxic alternatives are a positive benefit for those concerned about health and safety, but a serious omission for others who prefer the opaque qualities of the traditional pigments.

Some popular colours, such as Cobalt Blue and Viridian, have the word "hue" after the name, which means that each is a convenience colour similar to the familiar hues but mixed from less expensive ingredients.

The paints vary in opacity, ranging from transparent to semi-opaque to very opaque. In this respect, they're not so much a hybrid between gouache and watercolour as they are just a gouache of varying degrees of opacity. Some of the pinks and blues are tinted with Titanium White to create opaque designer colours. Because of the white, they will not behave like transparent watercolours, and will look chalky in watered-down mixtures.

The set comes with an informative colour chart that rates each of the colours on a scale of opacity, lightfastness and relative price. There is also a Composition and Permanence Table that lists detailed chemical descriptions for each colour.

The whole set of 48 colours sells for around £185. This is a pretty good deal considering these are 20ml tubes, while most gouache tubes are just 15ml.

This is probably a bigger set than most people really need, but if you're adventurous and want a big tray of goodies, it offers a lot of possibilities.

More paints than you probably need, but this is a great value selection for the adventurous painter.