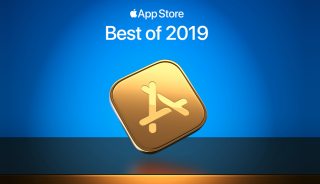 The time has come for Apple's 'Best of 2019' awards, where the company's App Store editorial team pick their favourites on everything from the iPad and iPhone to Mac and Apple TV.

This year creativity reigned supreme, which is  great news for the many creatives using mac and iOS devices. Looks like we now have some new entries to add to our round up of the best iPhone apps and the best iPad apps for artists and designers.

Moleskine also took the top spot in the iPad App of the Year category with its ever-popular Flow app, a tool that enables users to draw, sketch, and take notes in a digital Moleskine notebook.

Both well-known, high-quality creative brands, it was not a shock to see both Serif and Moleskine reach number one in Apple's 'best of' lists. The surprise winner for us was Spectre Camera, which won the best iPhone app of the year.

We'll be honest, we'd not heard about it up to this point, but are now rather excited about. Powered by artificial intelligence and frankly a mind-blowing amount of tech, Lux Optics' Spectre Camera app enables users to take breathtaking long-exposure photos with ease. We have no idea how this magical app produces the goods, but it looks very impressive...

For a full list of Apple's 'Best of 2019' app winners, head over the Apple blog. But we can't go without mentioning the most downloaded free apps of 2019. This is packed with all the old favourites, with YouTube taking top spot closely followed by Instagram and SnapChat. Check out the full most downloaded apps list for the best free and paid for apps for 2019, where we're sure you'll find something of use.