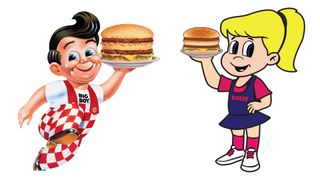 Perhaps the most famous aspect of American restaurant chain Big Boy is its titular mascot, the burger-carrying boy with coiffed hair and (slightly terrifying) wide eyes. But it seems Big Boy is being replaced with a brand new mascot – a young girl named Dolly.

Dolly has already replaced Big Boy on the company's website and social media pages. This marks the first time in the restaurant's 84-year history that Big Boy himself has stepped out of the limelight, making way for the blonde-haired Dolly, illustrated in a rather less detailed cartoon style (check out our character design tips for some slightly more inspiring examples).

Big Boy replaced? We told you something BIG was coming!Join us at https://t.co/7PBDJTMDw5 to find out more and even have a shot at some sweet rewards!#whoisdolly #whereisbigboy pic.twitter.com/VbBOyOOleeJune 29, 2020

It seems Dolly is already part of Big Boy's, er, extended universe. According to the restaurant's website, the character, who has featured in the Adventures of the Big Boy comic book series and Big Boy kids' menus and colouring pages since the 1950s, has always been "Big Boy’s side-kick".

Predictably, some fans weren't happy with the change, with many taking to Twitter to declare their outrage. "You cowards, bowing to the so-called movement – I will never eat here again!" one exclaimed, while another asks, "what part of BIG BOY don't you understand?".

Gone too far! What group are you trying to please now? Big Boy is off the list for me.July 7, 2020

The company has since revealed (below) that the change isn't permanent. Indeed, the stunt was created to promote 'The Dolly Chicken Sandwich', with Big Boy "simply sharing the stage" with Dolly for a moment. We have mixed feelings about discovering that, rather than representing a bold new rebrand, Dolly's appearance seems to be temporary.

The illustrious 80s hair band Cinderella once said: "you don't know what you got till it's gone."Well, what you got, never left. Our Big Boy is just sharing the stage for a hot minute with his old pal Dolly. Wait, what? Here's a little video to clear the air... pic.twitter.com/y32WEGfZcwJuly 7, 2020

While it's unclear whether Big Boy has backtracked on Dolly as a result of the complaints, the video above suggests that she was only ever being rolled out to advertise a new burger – making the whole stunt feel a little opportunistic (rather like the debacle of McDonald's socially-distanced logo).

Still, there's no denying that Dolly's appearance has got fans (and design websites) talking, and we hope she isn't doomed to disappear completely when Big Boy inevitably returns. And while we're not sure we'd call the advent of Dolly one of the controversial moments in branding, the response just goes to show how protective fans can feel towards their favourite mascots.