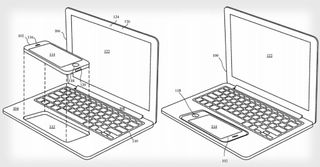 It's always fun to poke around at Apple's various patent filings to catch a glimpse of what ideas the company has up its sleeve for future devices. But every now and again we see something that truly surprises us – and this concept fits squarely into that category.

What do you get when you cross one of our best camera phones and our best laptop for graphic design? Perhaps it would look a little like this design, which quite literally combines an iPhone and a MacBook. Spotted by Patently Apple, the patent (below) imagines a hybrid design in which the laptop body is powered by an iPhone, which sits where you'd normally find the trackpad.

If the concept ever sees the light of day, it could allow creatives the convenience of using a single device, and attaching the 'laptop' accessory when more serious work (along with a keyboard and larger screen) is required. Of course, if this thing was powered by one of today's iPhones, it would struggle to keep up with a MacBook Pro – but in a few years time, perhaps it's feasible that the iPhone could become one device to rule them all.

The idea of using a smaller device to power a larger accessory isn't entirely new – in fact, it's the basic principle of this incredible recent iPhone concept that envisions an Apple Watch/iPhone hybrid. But a concept which combines the iPhone and MacBook is even more ambitious, and we wonder what such a device would mean for the iPad – could it end up cutting out the middleman?

We've seen all sorts of weird and wonderful Apple patents lately, from a bendable MacBook to foldable iPhone. Interestingly, Apple first filed this iPhone/MacBook concept in 2017 but has just applied for a continuation patent, suggesting it could be one step closer to becoming a reality. Until then, you'll have to make do with two separate devices. Check out the best iPhone and MacBook deals below.