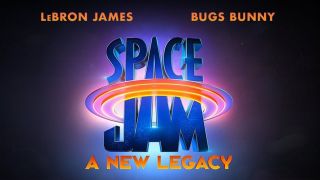 A sequel to 1996's Space Jam has been on-and-off since 1997, but Warner Bros. eventually officially announced the development of a sequel (staring American basketball player LeBron James) in 2014. And now, a mere 23 years later, we finally have an official title and logo.

LeBron James took to Instagram (below) yesterday to reveal the logo and title, which were embroidered onto his hat. As title reveals go, it wasn't the slickest  (the whole thing reads backwards, for a start), but it confirmed that the film is called Space Jam: A New Legacy, with a logo featuring a similar 'ring' motif to the 1998 version. The film is slated for release in 2021, and expected to combine live action and animation like the original. Check out our favourite css animation examples if you fancy creating some of your own.

The original Space Jam film starred Michael Jordan alongside a host of animated Looney Tunes characters (including Bugs Bunny, Daffy Duck), whose freedom Jordan must try to win in a basketball game. Despite mixed reviews, it became the the highest-grossing basketball film of all time.

While release dates are being pushed back and productions paused in the wake of the coronavirus crisis, LeBron James recently told the Road Trippin’ podcast that the film has "always been scheduled to come out in June of 2021, so we’re kind of ok. And a lot of it right now is animation, so being indoors is actually great for us. So we’re still on."

A year might seem a long wait but until then, there's always the first film – and its website. The Space Jam homepage has remained unchanged since 1996, and is a delightful hit of nostalgia in these strange times. Head to spacejam.com and you'll find exactly the same sparkly background and garish fonts that greeted web surfers in the 90s. Don't forget to check out our guide to the best web design tools if you fancy making something a little more, er, contemporary.