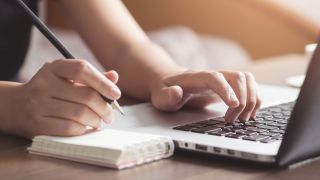 Money. What is it? Nobody knows; all anyone's really sure of is that they'd probably like more of it, please. And chances are that, whether you're a junior designer or an art director, you're feeling the post-Christmas pinch, making now the perfect time to have a look around at what better-paying creative jobs are out there.

The good news according to PayScale is that a good few creative jobs are in high demand right now, meaning that if you play your cards right you could score yourself a new job with a healthy pay increase.

While there haven't been any massive increases in pay across the art and design sector in 2018 – according to PayScale's research, salaries are up just 1.1 per cent year on year – PayScale's worker survey data has revealed the most in-demand creative jobs, the ones you should be aiming for if you're angling for a healthier income.

It turns out that the most in-demand design job right now is lead graphic designer, with a 234 per cent growth in 2017, and a median salary of $47,900 – bear in mind that's not the average salary, rather it's the halfway point along the salary scale.

For a step up the pay scale, a motion graphics designer is looking at a median salary of $57,200, while for a data visualisation specialist it's more like $69,000. Top of the design jobs, though, is senior product designer, with a median salary of $121,000.

If you're working more on the web side of things, there are a couple of interesting jobs that have seen serious growth. Senior mobile developers are much in demand, with a 194 per cent increase in jobs since 2017 and a median salary of $110,000, so if mobile's your thing then now would be a good time to polish up your CV.

Top of the list of in-demand jobs right now, though, is full stack developer, as we've previously mentioned in our run-down of the top 10 web skills that pay. While the median pay isn't as high as that for mobile developers – PayScale suggests $70,900 – bear in mind that your value as a full stack is dependent upon how much expertise you can bring to the job, so there's plenty of potential for top-end pay.

Looking ahead, PayScale also has some interesting thoughts on what the in-demand job areas are likely to be in 2019. Some are heavyweight tech areas such as cloud computing and AI, but it also foresees demand in virtual and augmented reality, big data and digital marketing. And while it's more applicable in the US and Canada than anywhere else right now, there's also likely to be an upswing in the cannabis industry; now's the time to be pitching fresh cannabis branding to US companies!