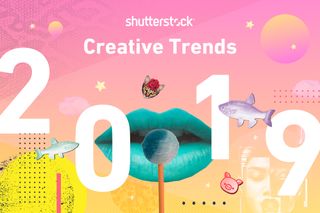 This year has so far been full of exciting and daring creative expression as people look for new ways to stand out and create something unique, whether this be through advertisements, on the catwalk or in movies.

At Shutterstock, we released our Creative Trends Report back in January to predict the top influences for design and visual production in 2019. The trends were forecast by gathering and analysing data across images, video and music and included billions of searches and downloads within Shutterstock’s collection of 280 million images by customers around the world.

The top three major trends for 2019 were Zine Culture, '80s Opulence and Yesterday’s Tomorrow, and we also predicted some rising trends, which included a trend for Japanese cuteness, Kawaii. As we head into September, we look back at the past eight months to see whether these predictions have come to fruition, and predict where they may still have influence throughout the rest of the year and beyond.

Want to see how these trends have influenced the world of design? Check out how they've been incorporated into these inspirational design portfolios.

Historically, zines have been venues for the counterculture to freely share ideas. They disseminate the voice of people through DIY-style media. This made it a perfect theme for creative agency, Don’t Panic, to spark political debate with its flyposters, carrying the hashtag #stickittotheman, which appeared all over London following Boris Johnson becoming the new Prime Minister. The zine-inspired poster campaign encourages pedestrians to stick their used chewing gum onto the face of Boris Johnson.

The zine culture trend was originally expected to predominately be seen on social media, but it has recently influenced product design like the Nike Air Force 1s and multichannel advertising campaigns, including Bombay Sapphire’s Discover the possibilities ad (above), created by AMV BBDO.

This ad follows three individuals in a hyperreal representation of the creative process as they bring their masterpieces to life. In particular, the first two individuals feature random objects that are presented in a zine-like video format, but as we witness, this is part of the process to showcasing their individual creativity – a key element of zine culture. This example shows how zine can be applied in videos and in ways other than the typical loud and collage style that we regularly see.

Read more about the rebirth of the zine .

Outside of advertising, ‘80s Opulence – all about animal prints, clashing and attitude – has become increasingly relevant as high-profile celebrities bring back fashion trends that were popular in that era. Taylor Swift donned an outfit for the MTV VMA’s by Versace (above), featuring the quintessential chains that are key to the ‘80s Opulence trend.

The huge popularity of the '80s-based show Stranger Things has also given fashion brands the chance to hijack the launch of the third season and create items that appear in the episodes, for example, Levi’s ‘Stranger Things’ Hat. Other Stranger Things-related items include New Coke's comeback.

In terms of entertainment, we can see the Yesterday’s Tomorrow trend having an influence on games with the recent launch of World of Warcraft Classic, and the planned release of Disney’s retro games Aladdin and The Lion King later this year.

All these games originally used basic vector graphics and synth music that will be brought back within these games in 2019. As well as video games, the designs associated with Yesterday’s Tomorrow have also been prevalent in music and entertainment, particularly Muse’s Simulation Theory album cover and show design (above), John Wick: Chapter 3 – Parabellum poster, and Pokémon Detective Pikachu.

As well as the major trends from the report, there was also a list of Rising Trends predicted to have a more subtle impact in 2019. Adidas and HYPEBEAST have recently created a campaign to promote the new Adidas originals Ozweego (above) for the Chinese market.

Based in a futuristic setting with innovative graphics, it fits in with the Everyday Futurism trend from the report, which celebrates technological advancements in our society. The ad also has a scene that features influencer Lala Takahashi creating her own zine-inspired poster.

Additionally, there was the rising trend Rococo Romance, which focuses on the Rococo period and its dramatic vintage patterns, soft pastels, sensual light and shadow, and elegant curving lines. Galaxy adopted this trend completely with its Accidental Renaissance campaign, created by BBDO Dublin. The ads focus on moments of everyday 21st-century life, with a dramatic painterly vibe that is synonymous with the Rococo Romance trend.

Another rising trend was Kawaii – the culture of cuteness in Japan – which is taking the world by storm.  We saw this trend come to life in London at Hyper Japan – a three-day festival celebrating Japanese culture.

We expect this trend to continue to gain momentum when the Rugby World Cup in Japan starts in mid-September. It’s likely that brands will want to channel the local culture around the global event by using creative designs influenced by Kawaii to resonate with the right audience.

It’s clear to see that the Creative Trends Report has made accurate predictions so far this year, especially with the major trends. There are so many possibilities for these trends to be used in diverse ways and through multiple mediums that we expect they will continue to have an influence beyond 2019.