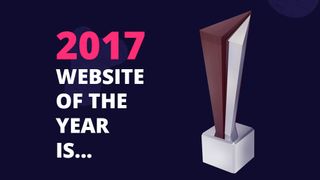 The end of the year is the perfect time to take stock and look back on what's happened over the last 12 months, and web design isn't being left out. We've already seen how Spotify has wrapped up 2017 with witty ads, but now it's time for CSS sites to shine with the CSS Design Awards 2017.

Founded in 2009, the CSS Design Awards celebrate inspirational web designs created by individual designers, studios and agencies. The awards see one site being crowned the Website of the Year in recognition of its creativity and innovation.

This year the award went to Active Theory for the site Welcome to Hogwarts, which is part of the hugely popular Harry Potter-inspired Pottermore universe.

We headed over to the Welcome to Hogwarts page to check out everything the site has to offer, but were a bit put out when we were hit with a landing page that first warned us it might not work on our browser (Chrome) or device (iMac), and then demanded our login details.

Sure, it's a landing page with glorious visuals, an appropriately atmospheric soundtrack, and buttons that sing out with an icy jangling sound. But it's an enjoyment-blocking landing page nonetheless.

Perhaps we're griping because it's been a few years since anyone on the team logged into Pottermore. It took us a while to remember our account details (we're the sort of people who did the Sorting Hat quiz then never returned). That said, once we were in we had a fun time zipping around turrets and picking up titbits of Potter trivia.

A panel of over 300 international judges settled on Welcome to Hogwarts as the winner, which narrowly pipped Mausoleum of Augustus by Havas Milan & Uprising to the top spot.

As well as crowning an overall winner, the CSS Design Awards also recognised websites that were the best in their field. These included the likes of 86 and a half years by Clubhouse Studios, which scooped the best interactive photography nod, and Aristide Benoist's portfolio site designed by Ben Mingo with 3D work by Michael Novia, which landed the best in class portfolio site award.

Speaking on the CSS Design Awards blog, a spokesperson for the event said that 2017 was the year of motion animation. "Transitions, animated menus, micro-interactions, flow-on content, and of course webGL, all joined forces to stomp hard on static sites, making them seem like a distant memory. Coupled with this, an increased use of JS tech helped creators control sequential elements making storyboards come to life with fantastic results."

To explore the full list of sites gaining praise from the CSS Design Awards judges, explore the Website of the Year site, which, appropriately, is beautifully designed and a joy to scroll through.