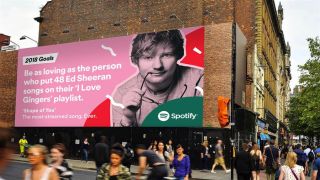 Music streaming service Spotify is wrapping up 2017 with a witty advertising campaign that uses people's unusual listening habits to create potential 2018 goals. This isn't the first time Spotify has run a funny data-driven campaign. Back in 2016 it took user information and created the brilliant "Thanks 2016, it's been weird" ads in response to the year's events.

Unlike last year's campaign, which was all about reflecting on the madness of 2016 and delivering some well-earned gallows humour, this series of ads decides that 2017 has been bleak enough and doesn't deserve to be remembered.

Instead, Spotify is looking ahead to 2018 with posters and billboard ads that use curious playlists and listening choices to create 'goals' for the next 12 months. These include goals such as "Eat vegan brisket with the person who made a playlist called 'Leftist Elitist Snowflake BBQ" and "Be significantly less proficient at goodbyes", which is based on impressive streaming data for the song (you guessed it) Too Good At Goodbyes.

Scroll through the gallery below from left to right to see some of the funny Spotify billboards.

Speaking to Creativity, Spotify's CMO Seth Farbman says: "When we started to look at this year's data and what the news was every day we realised there was a lot of fatigue and exhaustion with all the events in 2017. So rather than go back and relive that exhaustion, we thought we would look forward and bring in a spirit of hope and optimism."

The campaign was created by Spotify's in-house agency and will run in seven US cities, namely: New York, Los Angeles, Chicago, Dallas, Miami, Nashville, and Washington DC. Location-specific ads will also appear in 18 different areas around the world.

While this is another great example of how companies can turn dry data into engaging advertising with a personality, we can't help but wonder how surreal it must be to see your listening habits blown up into huge posters and stuck up around town for all to see.

Either users are going to become a lot more wary with their playlist names or – and we imagine this is the more likely scenario – they're going to embrace Spotify's cheekiness and come up with hilarious titles that are just begging to be turned into posters.

We can't wait to see what music fans and Spotify come up with for the 2018 campaign.