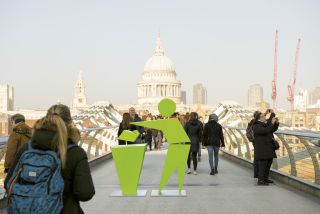 Award-winning brand design agency Conran Design Group has partnered with anti-litter charity Keep Britain Tidy to create a new logo design and identity. At the heart of the new look is a revamped version of 'The Tidyman' symbol, a geometric character dropping a piece of litter into a bin who has been around since the 1960s.

Tasked with providing a single, unified identity which better reflects Keep Britain Tidy today, Conran Design Group thought it made sense to bring back 'The Tidyman' as part of a simplified brand architecture, rather than cluttering the charity with an array of new and confusing logos.

The history of 'The Tidyman' has been respected, but the new symbol has been given an updated edge to help it translate better across social and digital channels. This makes Keep Britain Tidy the latest organisation to dust-off a classic piece of branding, with companies such as the Co-Op and NatWest having already used old artwork and typography for their new identities.

"‘Working with Keep Britain Tidy on its brand and The Tidyman symbol was a fantastic opportunity," says Conran Design Group CEO Thom Newton. "We helped re-energise an important cultural icon, tapping into his heritage but bringing him into the 21st century. We created a symbol that will connect more actively with audiences across digital and traditional channels.

"The evolved brand and branding system will clearly signpost the organisational structure and remit and support more meaningful interaction with partners, supporters and the general public."

Keep Britain Tidy Chief Executive, Allison Ogden-Newton added: “Keep Britain Tidy believes The Tidyman should stand for something – our country’s desire to clean up its act and cut the billion pound bill for clearing up the tonnes of litter that is thoughtlessly dropped every day. He symbolises a single action that can make a big difference to our beautiful country.

“The work that Conran Design Group and Havas have undertaken will help support the transformation of the organisation and we are delighted with the results to date.”