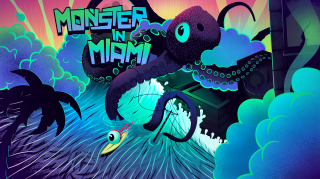 Affinity Designer has impressed Mac users since its launch with a range of fast, precise and feature-rich vector design tools that deliver a professional result.

And the good news is that a new Windows version of the consistently popular app is now available to purchase, providing all of the tools Mac users currently enjoy for a one-off payment of $49.99 / £39.99 / €49.99.

Used by professionals to create concept art, print objects and logos, as well as UI design, web graphics and mock-ups, Affinity Designer is a lean, multi-discipline app that streamlines workflows.

Designed to work on 64 bit Windows 7 and above, this version of Affinity Designer will match its Mac equivalent feature-for-feature. With support for eight languages, this release has been refined over a public beta testing period to ensure that Windows users receive the same experience as Mac users.

To showcase the awesome creative power of Affinity Designer on Windows, artist and illustrator Neil Ladkin, who also works as the Creative Director at Affinity developer Serif, created this image titled Monster In Miami.

Specially created using Affinity Designer, and visible on the app’s webpage, Monster In Miami represents the first time Ladkin made the switch from using the tool on a Mac to Windows. Yet despite having used Affinity Designer on Mac since the beginning, he found the switch seamless.

Neil says: “The inspiration for the design came from the late Eighties artwork of Jim Phillips and Santa Cruz, who created the amazing skateboard designs that inspired my youth, pushed me into art and started my passion for action sports. It’s a style that I really appreciate and given an open brief, why not?!

To show you how he used Affinity Designer so effectively, Ladkin is here to walk us through the creation of Monster In Miami.

"I started with a very rough outline sketch thinking about the character and scene."

“I then take a photo of the sketch and import into Affinity Designer, then over the top I block in the colour and shapes that form the composition.”

“At this point I’m starting to add in the gradients and think about the colour palette.

"Once this is done, I’m adding in the detail using a tablet and a pressure adjusted vector brush.”

Neil adds: “What surprises some people is that the Windows version performs in exactly the same way as the Mac version. That’s because the two have been developed from scratch to share the same back-end code. “Not only does that mean perfect cross-platform file compatibility, it means the same memory management and rendering technology which gives Affinity Designer its unbelievable speed.”

If you’re an experienced digital designer, illustrator or artist, you’ll feel instantly at home with Affinity Designer’s powerful selection of essential tools. You can also expect:

Affinity Designer is part of a trio of professional quality design software tools. Affinity Photo launched for Mac last year and Windows earlier this month while Affinity Publisher is expected in 2017.

The Mac version, now with Touch Bar support, and the official Affinity Designer Workbook (pictured below) are also currently available.