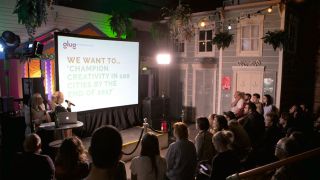 2016 was awesome for Glug; it's seen our global creative network go from strength to strength. We're now flexing our muscles in over 20 cities across the world, including London, New York, Amsterdam, Berlin, Stockholm, Dubai, Sydney, LA and Taipei – and we're on a mission to cover even more in the new year.

Throughout the year and across our chapters, we've been fortunate to have an eclectic array of speakers in 2016. We've heard the global big guns Google, Facebook, Twitter, Airbnb, Etsy, IBM, PlayStation, MTV, BBC and Microsoft share their stories and their take on creativity. We've also had amazing agencies visiting us, such as IDEO, Moving Brands, DesignStudio, The Partners, ustwo and Wolff Olins, to name but a few.

And of course we've also welcomed an amazing array of independent creatives including Anthony Burrill, Supermundane, The Doodle Man, Merijn Hos, Mr Bingo, Isabel + Helen, Marylou Faure et al… the list is long and we could go on and on. All in all, it's been an incredibly informing, enlightening and exciting year for all of our Glug chapters. Here's a recap of some of the best Glug events from 2016...

Highlight of the year: What's been exciting for our London chapter this year is that we scaled back the size of some of the events, but are hosting more of them. This has resulted in us having over 50 fantastic speakers and the opportunity to meet a lot of new Gluggers. It's been our busiest year so far, but also our most rewarding – we can't wait to see you all in 2017 again.

Highlight of the year: With a push on truly eclectic line-ups for this year's events we've seen the NYC chapter deliver some really thought-provoking events, with great buzz and community engagement. They certainly take the award for the most impressive venue when they held their disruptors-themed event at the LED Labs – which looks exactly as it sounds: a lab filled with interactive LED screens. Brilliant.

Highlight of the year: The biggest buzz in the Glug world this autumn was the fact that we were launching a chapter in Berlin. Our host duo Lauren and Erin arranged not only four epic speakers and an amazing venue, but they also sorted lots of giveaways through our pals Awesome Merchandise. Even before their first event happened (which sold out instantly) we were inundated by requests of 'When is the next one happening?' All we can say is: watch this space.

Highlight of the year: Our chapter in Amsterdam is the one that really focuses on Glug rule number two: celebrate the new. With a focus on local homegrown businesses and creative talents – including design strategist Susan LK Gorbet, animator Anna Eijsbouts and Studio Sophisti's Wouter Reeskamp – we've had two incredibly successful events in the 'Dam this year, and we're really looking forward to the next one.

Highlight of the year: With two events under their belt, the Sydney team are taking this chapter from strength to strength. Ahead of the launch they guerrilla advertised the event by putting up posters in lunchrooms of local agencies and saw over 150 Gluggers attend. Oh, and both of their events have been hosted against the backdrop of the Sydney Opera House – safe to say that they beat us all this year, when it comes to views.

Highlight of the year: Our Manchester team knows how to cater for our Gluggers' appetites. Not only do they serve creative insights and inspiration through their line-ups, they also order mountains of pizza for each event – double win. A true highlight of the year was when One Minute Briefs came in and set a live brief on the night. We had some real gems in the outcomes.

Hosted by: We Are Goodness (Lisa Hassell, Adam Clarke)

Highlight of the year: During 2016 we've had the opportunity to hear some incredible creative talks – and at one point even a song – from our fantastic Glug Brum chapter. This is one of the most well-attended and raved-about events in our network, and it's all down to the hard work and eye for creative curation of Lisa Hassell and Adam Clarke.

Highlight of the year: The Glug Brighton events are renowned for being nothing short of a one-night creative festival. Not only do they have top speakers, they also arrange for artists, makers, creators and 'doers' to interact with the event attendees through live-art sessions, interactive installations, workshops, exhibitions and pop-up shops. If you haven't been to a Glug Brighton yet, make sure to swing by in 2017.

Highlight of the year: What the gang behind our Glug Leeds chapter have proved to us all this year is that it's not so grim up north – which was also the title of their July event. The community spirit in this chapter is very impressive: they're a tight-knit, supportive and constantly growing bunch of Gluggers, who share a passion for all things creative. With a thoughtful series of events this year (ranging from careers clinics to summer BBQs) we can't wait to see where 2017 takes this chapter.

Looking ahead we've got our eyes set on broadening our offering as a creative community, and have some very exciting news coming in 2017. As you can imagine we're busy mapping out where to go next too – and as always we're on the look-out for kick-ass hosts to embark on the journey of celebrating creativity with us. What we're most looking forward to, however, is continuing to meet even more Gluggers.

Has Glug reached your city yet? If not, get in touch – we're always keen to hear from creatives who want to become part of our global host community and bring Glug to their city.

This article originally appeared in issue 261 of Computer Arts magazine, buy it here