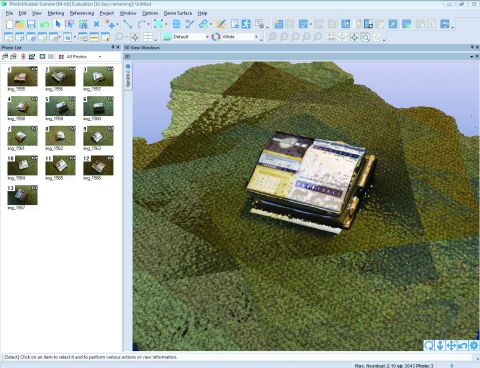 Depending on the user's skill level, PhotoModeler Scanner 2016 is a fairly easy to use tool that offers different options for creating 3D models. However the clunky interface could make it hard to operate if users don't have much prior experience in the field.

PhotoModeler has been around since 1993 when Eos Systems pioneered
the development of the first commercial all-digital close-range photogrammetry and image- based modelling system. Having been through multiple iterations of the software, Eos have now released their most recent version, PhotoModeler Scanner 2016.

PhotoModeler gives you several different options for creating your point cloud/3D model. Each one has pros and cons but the preferred method depends heavily on your requirements and the type of thing you are scanning.

PhotoModeler doesn’t just rely on automatic solutions which leave the user helpless if it doesn’t work. They also provide manual tools that give you far more control over ensuring that the scanned objects create an accurate 3D model at  the end. Let’s take a look at the different options and see how useful each one is.

Firstly, the automated tools are called SmartMatch and DSM (Dense Surface Modelling). These both match features across multiple overlapping photos and form a dense point cloud by result, which can then be triangulated/ surfaced to form the shape.

These tools are automatic but are dependent on having a good quality overlap, as well as a sufficient number of distinct feature points. They recommend an overlap of 60 per cent with small angle changes from one photo to the next, but this can largely be trial and error.

Rest assured though that experience does make this process easier. One helpful tip is to think about what you’re scanning. If the features are high density then go for the DSM, but if they’re lower  density and spread across a bigger region, then you’re best off using SmartMatch. These automated tools worked OK during testing but are obviously heavily dependent upon the angles the photos were taken at.

Secondly, there are automated coded targets which are more suited for objects that don’t have distinct feature points. Placing on markers enables PhotoModeler to accurately match photos together and create an accurate 3D model.

Finally, it is possible to manually mark and reference features across multiple photos. This puts all of the control into the user’s hands. If you’ve ever had a go at manually stitching panoramic photos then you’ll understand how this  process works.

The collection of tools works really well and provides frameworks for creating 3D models of a wide range of object types – no matter how small or large, or dense with features. In terms of usability I found the interface a bit unclear and clunky.

I get that PhotoModeler want to give you all the tools you need but I think in the first instance it would have made sense to offer some really simple step-by-step processes for stitching and model creation. They have provided wizards but they’re not particularly clear.

In conclusion, I would say that this piece of software is definitely worth exploring and persevering with the interface, if you want to get involved in creating models automatically from photos.

Depending on the user's skill level, PhotoModeler Scanner 2016 is a fairly easy to use tool that offers different options for creating 3D models. However the clunky interface could make it hard to operate if users don't have much prior experience in the field.