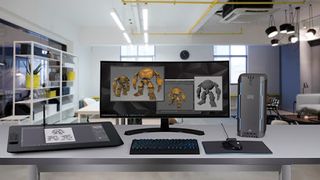 The demands of a digital creative often require hardware that is both super-powerful and portable. And while it’s easy to find devices that offer one of these requirements well, it’s rare to find a machine that excels in both areas. That is, until now.

The Corsair One Pro i180 is a powerful new gaming PC that is redefining the way creatives work. Combining an unprecedented amount of computing power into a  tower roughly one third the volume of a standard workstation, the i180 offers a creative freedom like never before.

And it looks good doing it too. Putting an end to the need for unsightly, bulky chassis to house all the power, the i180 boasts a carefully considered, sophisticated design that is smaller than (or could easily fit into) a backpack.

But don’t be fooled by its size, under the hood of this small but mighty machine is a 12-core Intel i9-9920X processor, Nvidia GeForce RTX 2080 Ti graphics card, plus a whopping 32GB of Corsair DDR4 memory. On top of that there's a 960GB SSD, meaning tasks are completed at lightning speed, and a 2TB hard disk to take care of general storage.

To put all of that power into context, the i180 runs four 4K HDR monitors plus a VR headset comfortably, and can handle the most complex ray-tracing rendering with ease. So whether you’re a game designer needing to render intricate 3D environments, or a video editor running multiple screens, the i180 will make it look effortless.

Featuring an in-built patented liquid cooling system, the i180’s processor and graphics card’s temperature is regulated to ensure optimum performance and minimal noise. The machine also comes with a Zero RPM Mode, allowing for a super-quiet, fan-less operation when idle – you won’t even know it’s there!

With all that going on under the i180 hood, you’d be forgiven for thinking its chassis would be an afterthought. But it’s anything but. A carefully considered design, the i180 is a far cry from most other bulky high-end PCs. It’s sleek, minimalist casing is covered in a 2mm thick bead-blasted aluminium shell, which will look beautiful on any desktop.

Built-in RGB lighting also allows you to personalise the system’s look, which will not only look good but serves a purpose too. For example, setting lighting to change colour when a project has finished rendering would be one great use of this novel feature.

When it comes to functionality, the i180’s design continues to deliver, complete with an easy-to-access front I/O panel, with two USB ports, a 3.5mm audio jack and a VR-ready HDMI port to connect all your most-used devices.  Add a two-year warranty and Corsair’s world-class customer support team on hand 24/7 and you’ve got a desktop PC that blows all the competition out of the water.

For more details on and where to buy this truly impressive piece of kit, visit the Corsair website.