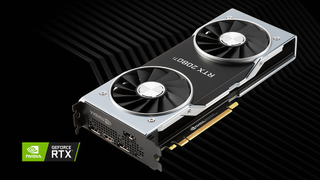 Black Friday and Cyber Monday are almost upon us, and we're already seeing some incredible graphics card deals surface. So if your desktop is slowing down, there's never been a better time to give your PC a new lease of life.

As you can imagine, there's a sea of deals out there, which includes some amazing offers on top brands like Nvidia and AMD. Here we've done the hard work for you and found the very best graphics card deals on offer right now. So whether you need a cheap performance boost or want to turn your PC into a 4K, VR-ready graphical monster, we've got you covered.

For digital creatives, a quality graphics card can make a huge difference when it comes to harnessing the power of creative software, especially when it comes to boosting 3D render times. Nvidia and AMD make two kinds of graphics cards that have been developed specifically for gaming and design use, which we will focus on in this article.

Below you'll find the best Nvidia and AMD deals right now. But if you're unsure about what graphics card is right for you, be sure to check out our best graphics cards post, which details each model and will help you make an informed decision.

Arguably the best on the market, Nvidia graphics cards are the go-to GPUs for many an artist and designer. Hard to beat when it comes to performance, Nvidia's flagship cards will push your PC's capabilities to limits you didn't think possible. Whether you want to build a formidable gaming rig or want lightning render speeds, Nvidia has a card to suit. Below are the best deals around on Nvidia's most popular models, plus some early Nvidia Black Friday offers.

When it comes to value for money, AMD is pack leader. So if you're in the market for a powerful graphics card but don't want to spend a small fortune, AMD can help. Performance-wise, you're not going to find an AMD graphics card to beat the horsepower of Nvidia's GeForce RTX 2080 Ti. But there are still plenty of quality, affordable options here to help turn your PC's settings up a notch.