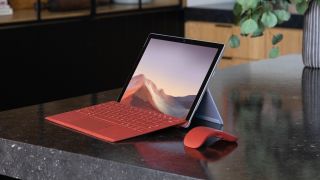 The Surface Pro 7 was released in October this year, much to the delight of Microsoft and Windows users. However if you'd told us then the shiny new device would play a major part in the January sales just a few months later, well, we'd have thought it wildly optimistic.

But news just in sees an incredible offer on the Surface Pro 7 and Type Cover, which knocks a staggering £440 off the regular retail price. That means those of you in the UK can now get both for just £829! And if you're in the US, you can get the impressive bundle deal for just $799.

The Surface Pro device has become hugely popular among the creative community in recent years. Able to run the full-fat version of Windows, the new Surface Pro is one of the best on-the-go laptops, offering the ability to run creative software without issue, all on a stunning PixelSense Display supporting the Surface Pen and touch.

So if you've had your eye on the Surface Pro, there's never been a better time to invest. There's also more deals to be had on the rest of the Surface range, details of which can be found on our dedicated January sales article.

If you're in the US, Best Buy also has an equally impressive Surface Pro 7 and Type Cover January sales deal running...

Surface Pro 7 + Black Pro Type Cover | i3 | 128GB SSD: $699 $959 at Best Buy
Save $260: A slightly less roomy model but still a brilliant deal, this offer at Best Buy shaves a huge $230 off the price of a new Surface Pro 7 and Type Cover. Just the tools to get 2020 off to a cracking start! Need a different spec? Best Buy currently has a number of excellent discounts on the Surface Pro range. View Deal

Not in the UK or US? You can still take advantage of some great Surface Pro 7 deals. Here are the best prices in your area: