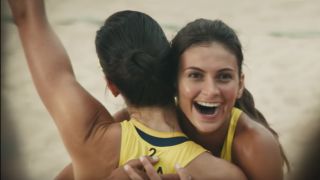 This Friday, all eyes will be on Brazil as 10,500 athletes from 206 nations descend on Rio for the 31st Olympic Games. And alongside them, creatives have been working hard to harness the excitement surrounding the event in the service of their brands.

Countless Olympics-themed ads are now packing our TV channels and social streams. But while most are pretty forgettable, in our eyes five really stand out. Mini-movies all, with top-class production values and a unique take on a universal experience, these ads all achieve the gold standard in Olympic advertising.

Of course, there might be some even better ads out there that we’ve missed. If that’s the case, please share your favourites in the comments below!

We normally expect Olympic themed ads to be colourful and upbeat, but this ad by Olympic partner Gillette goes very much against the grain.

Focusing on the physical pain and sacrifice involved in training for Olympic success, as well as the pressure on families and relationships, this is a darkly intense stuff. But the eventual payoff is all the sweeter for it.

With the tagline ‘Perfect Isn't Pretty’, this groundbreaking ad was created by Grey New York, enhanced by VFX courtesy of The Mill New York, and backed by an original song from Sia, featuring rapper Pusha T from Clipse and Brazilian samba-reggae band Olodum.

02. Channel 4 shows the Paralympics is about more than the sport

It’s been four years since the UK’s Channel 4, the official broadcaster of the 2012 Paralympics, released its grittily defiant Meet the Superhumans ad, making Public Enemy’s ‘Harder Than You Think’ the unofficial anthem of the London event.

This time around, they’ve sensibly avoided a copycat approach, and gone in a completely different direction. Essentially a musical about how disability shouldn’t stop you achieving your goals, both in sport and beyond, this ad is a joyous ode to human positivity and possibility.

Created by the channel’s in-house 4Creative team and Blink director Dougal Wilson, we fully expect this generation-inspiring ad to win lots of awards across the coming year.

Olympic-themed ads can quickly start to look samey. But Procter & Gamble found a simple yet original approach to the topic for this ad, which was released 100 days from the opening of the Rio Games, and less than two weeks away from Mother's Day.

Seamlessly combining the two occasions, the uplifting spot revives the brand’s ‘Thank you, Mom’ campaign with a series of vignettes that shows how athlete’s mothers helped them through times of trauma and stress while growing up.

Like the Gillette ad, it doesn’t shy away from the darker side of life, and reminds us that sporting success isn’t about the athlete but the people who support them on their journey. This emotive ad was created by Wieden + Kennedy Portland with VFX from The Mill.

The buzz surrounding the Olympics isn’t just about the sports themselves, but the coming together of all Earth’s peoples. And so this Samsung commercial paying tribute to the first Olympian from the new nation of South Sudan really tugs on the heart-strings.

It centres around 19-year-old Margret Rumat Rumat Hassan, a 400m runner, and the chanting of her name which slowly spreads across the nation and builds to an inspiring climax. This uplifting ad was created by Leo Burnett Chicago.

While the other commercials here all reflect serious issues surrounding the Olympics, this ad reminds us that at its core, sport is about fun and enjoyment.

Created by BBDO, it follows 15 athletes from around the globe on a slightly ridiculous, fictional journey to the Games, along the way showcasing the different ways to pay with Visa.

One of the few ads to fully exploit the spectacular Brazilian scenery, this glorious ad is topped off by a Morgan Freeman voiceover and a true Northern Soul classic, Edwin Starr's 25 Miles. What more could anyone ask?