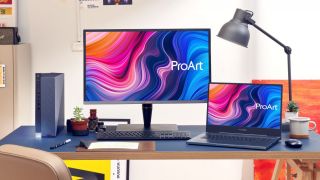 IFA, the annual trade show for consumer tech, is underway in Berlin, and not ones to waste any time, Asus has already pulled out all the stops, revealing its ProArt StudioBook range of laptops and claiming it's ProArt StudioBook One is the "most graphically-powerful laptop in the world."

Aimed specifically at digital creatives and professionals, the 15-inch 4K laptop boasts an Nvidia Quadro RTX 6000 graphics card and Intel Core i9 processor, which promises the ability to tap into the power of a high-end desktop PC, without being constrained to a desk. Also among the range is the the ProArt StudioBook Pro X, which is the first Quadro-powered laptop to have a second display built-in, with its ScreenPad 2.0 replacing the traditional touchpad found in other laptops.

With these specs, it's hard to argue that these devices look to be some of the most powerful laptops currently on the market. “The Asus ProArt StudioBook One is the first laptop to offer the NVIDIA Quadro RTX 6000 in a mobile solution, delivering the world’s fastest performance so users can run complex workloads wherever they go,” said Samson Hu, co-CEO at Asus. “Our customers can quickly render animations, edit 8K videos in real time or run data analytics more smoothly and efficiently than before.”

We've yet to get our hands on any of these seemingly powerful new devices, but early indications suggest the Asus ProArt StudioBook One could be set to take the number one spot in our round up of the best laptops for graphic design. If Asus' claims are correct and the ProArt StudioBook range really is offering portable devices powered by workstation-grade GPUs, these devices could open up a whole lot of opportunity and creative freedom to artists and designers all over the globe.

That said, we expect the high specs to be matched with a high price tag, so if you're interested, you might want to start saving now. From the looks of it through, Asus is trying to meet the demands and budget of everyone, promising a range of devices all at different specs and costs. Pricing is to be confirmed when the Asus ProArt StudioBook series laptops are released in October 2019.

Don't want to miss any news from IFA 2019? Our friends over at Tech Radar are in Berlin and reporting live from the event. And if you can't wait to get your hands on a super-powerful laptop, here are the best devices money can buy right now: