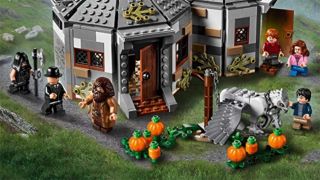 Fans of Lego, Harry Potter – and indeed Harry Potter Lego – rejoice, as this week's Amazon Summer Sale has announced up to 30% off Lego sets.

If you're a fan of either of the behemoth brands, it's likely you've been coveting the fantastic array of Harry Potter-themed Lego sets around at the moment. Now is the time to treat yourself (or a small person you know) as the Amazon Summer Sale has slashed the price of the Harry Potter Hagrid’s Hut: Buckbeak’s Rescue Playset by a whopping 24 per cent, taking the price of the set down to a mere £37.99. You only have until the 10 July to take advantage of this deal, so don't hang around too long.

This Harry Potter-themed set is packed full of features, and themed around a buildable Hagrid's hut, which includes two rooms, accessories, furniture and even a switch-operated light brick for the fireplace. It also comes along with six minifigures, and all for £12 less than the RRP. This is by far the cheapest we've seen this set on sale for, so it's a great chance to go back to (wizarding) school, and start creating your magical masterpiece. For more HP-themed sets, you can also see our best Lego Harry Potter sets buying guide.

Harry Potter Hagrid's hut | | £37.99 at Amazon
24% off: Build your own two-room Hagrid's hut, complete with accessories, six minifigures and a working switch light, and save your self £12. The hippogriff figure has moveable wings and head, perfect for imaginary play. View Deal

As part of the set of bumper Amazon offers, you could also start dive into the popular Ninjago Jay's Cyber Dragon Mech Building Set (now with 24 per cent off), or get the littlest builders involved with the DUPLO Town Fire Station with Light and Sound (for 21 per cent less than RRP). You can check out the selection of kits on sale here, or see below for more information.

Ninjago Jay's Cyber Dragon Mech Building Set | | £33.99 at Amazon.
Save £11: This impressive set features a posable, detailed mech dragon (once you've built it, of course). Including five minifigures,  two of which can ride aboard the dragon, perfect for imaginary play. View Deal

DUPLO Town Fire Station | | £29.99 at Amazon
Save 21%: Complete with light and sound, this fire station is perfect for early Lego builders. The bigger Duplo bricks are easier for little hands to manipulate, and they will love the feature set. View Deal

Not quite what you're looking for? We've found even more great savings on Lego. Check them out below.