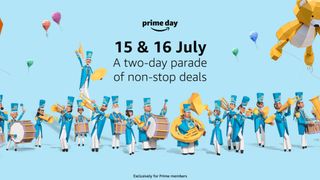 After months of speculation about when Amazon's biggest retail event is happening, this morning the company finally confirmed that Prime Day 2019 will start at midnight on Monday 15 July. And in what will be the longest Prime Day ever, the event will run for 48 hours, ending at 11:59pm on Tuesday 16 July. So if you've been holding out for a creative bargain, you can now mark the dates firmly in your diary and bookmark our best Prime Day deals page, which we will be updating as and when all the best offers come in.

The official dates were revealed in an email sent out to Amazon customers earlier this morning, which stated: 'This year we're celebrating Prime members with exclusive entertainment offers, brand new product launches, and more. Prime Day brings you the best of shopping and entertainment and starts at midnight on Monday 15 July with hundreds of new deals popping up every hour.'

While the Prime Day bonanza is still a couple of weeks away, it looks like Amazon has started the party for its Prime members, already discounting a number of new products for a limited time. If you're not currently an Amazon Prime member, it's easy and free to sign up, and you can cancel at any time during the initial 30-day trial period with no strings attached.

If last year is anything to go by, we're expecting to see some incredible creative deals this Prime Day so make sure you stay tuned. In the meantime, don't miss our tips on avoiding a Prime Day rip off and how to get the best creative Prime Day deals on the day.